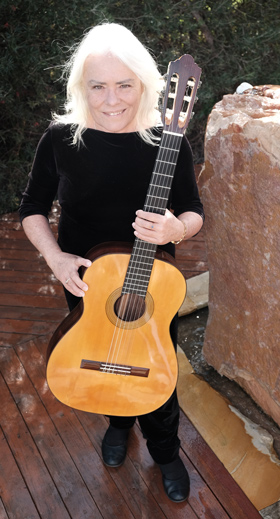 I have been playing the classical guitar since 1969, and teaching since 1974. My teachers have included Lionel Cranfield, Wim Vervest, John Duarte, Stanislaw Kowarsky and Stefan Bulmer. I have been inspired in masterclasses by English concert guitarists John Mills and Gerald Garcia, and by Australian concert guitarist and brilliant teacher Timothy Kain. I was the first guitarist to achieve a Bachelor of Music in Performance on the guitar at UWA, completing my degree with Honours in 1981. While studying there, I was particularly inspired by the enthusiasm and scholarship of Professor David Tunley. I am also the first guitar teacher to teach the Suzuki method in WA, under teacher trainers Andras Tuske and Zeah Riordan. In addition, I am a fully trained Alexander Technique Teacher, having graduated from the Sydney Alexander Teachers training School in 1988.

Other important influences on my playing and teaching have been Oliver Fartach-Naini, Richard Charlton and Paul Svoboda. Oliver’s interest in contemporary music and the compositions of Richard, Paul and Duncan Gardiner have influenced and inspired my own compositions. I have produced two CDs; "Rivers of Light - Rhythms of Fire" - traditional classical guitar repertoire from Bach to Brouwer, and "Bluff Knoll and other Australian Landscapes"- my own compositions, performed by myself, my students and my son Beren Scott who plays the cello. Both CDs were recorded, edited and mastered by contemporary and computer musician Ward Darcey.

I teach classical and Suzuki guitar at Carey Baptist College, Hale School and Helena College. I have been a member of the Classical Guitar Society Orchestra for fifteen years, and am currently the conductor of the Orchestra. My guitar ensembles have performed in the WA Classical Guitar Ensemble Festival run by the School of Instrumental Music and the Classical Guitar Society since its inception. I have performed both as a soloist and with other classical musicians (flute, guitar, cello, violin, viola ...) in Perth, Sydney, Adelaide and throughout the South-West.